The easiest way to tell these homonyms apart is to remember that, most of the time, we use effect as a noun and affect as a verb. In other words, an effect is usually a thing, while to affect usually involves doing something. (Mnemonic tip: affect = action.)


However, English being the gloriously contrarian language it is, there are other, less common definitions of both words that don’t follow the same rule.


Effect as a Verb


The verb effect is most often seen in bureaucratese as a pompous way of saying “to bring about” or “to make happen.”


This is not to be confused with the verb affect, which means “to influence.”


Affect as a Noun


An affect (pronounced AF-fect rather than af-FECT) is an emotion or, in psychiatric circles, the manifestation of an emotion. For example, descriptions of depression or autism will sometimes mention a “flat affect,” that is, not showing visible evidence of feelings.


Affect as Another Verb


Beyond “to influence,” the verb affect can also mean “to pretend (a behaviour) in order to impress.” This meaning is related to the noun affectation, “a contrived manner.”

So, you might affect a certain affect in order to create an effect that will affect those around you, thus effecting your master plan.

Posted by Grammarlandia at 16:40 No comments:

Sex and the Single Quotation Mark

Yes, okay, single quotation marks don’t actually have sex as far as we know, but they certainly do seem to be proliferating these days.


Keeping Singles in Their Place


Well, there are a couple of other reasons, namely if you’re writing something technical about linguistics or philosophy—but let’s face it, you’re probably not. Also, if you’re in the UK (or you’re in America but like being kind of pretentious), then you might permissibly use single quotation marks where the rest of us use doubles. All other uses, according to the Chicago Manual, are incorrect.


But journalists operate out of a different rule book—literally: The Associated Press Stylebook (usually referred to as AP style) uses single quotation marks in headlines to save space.


Since headlines don’t include italics, words that would normally be italicized, like movie titles, are put in quotation marks instead.


Single quotation marks tend to be the go-to in any medium where space is at a premium, such as Twitter (although that site is a bit of a punctuation free-for-all). 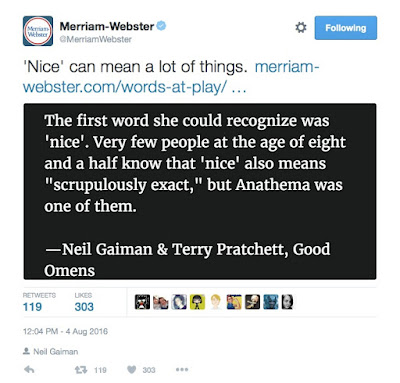 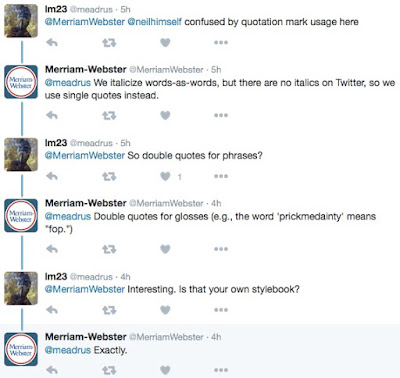 The logic is clear, but the effect is a little confusing.


If all this has your head spinning, just remember that the raison d’être of punctuation is clarity. First ask yourself, do you really need quotation marks around that word or phrase? Would italics work just as well, or better? (See Quotation Marks, Parts One and Two.) Second, will using both single and double quotation marks in the same piece make things more or less comprehensible for your readers? Is what you gain in precision worth what you’re losing in visual coherence?

Once you have pondered these questions and come to a decision, punctuate as you see fit. But be prepared to defend your choices to the death. Or at least on Twitter.

Posted by Grammarlandia at 13:33 No comments:


Quotations marks are not, as some people seem to think, a good way to sexy up your signage with bizarre offers of “free” merchandise (meaning you have to pay?) or “special” deals (sounds suspicious).

Putting quotation marks around a word is another way of saying “just kidding!” These so-called sneer quotes give a word an ironic or sarcastic spin.
But don’t use quotation marks after the word so-called; that would be overkill.

The first time you use a word or expression that might be unfamiliar to your readers, you may want to put it in quotation marks. It could be a technical term, a bit of obscure jargon, or a slang expression that’s out of keeping with the tone of your piece. You can skip the quotation marks for subsequent uses of the word.
Use this device sparingly, or you risk distracting your readers with too much punctuation. And don’t use it with widely familiar words, because that’s just annoying.

If you want to talk about a word itself rather than its meaning (for example, “Do you spell ‘color’ with a u?”), quotation marks are a good way to clarify your intention and avoid confusion. Or you can do as I do and use italics instead; both are correct.

You can put the meaning, or gloss, of a word in either quotation marks or parentheses. The same goes for English translations of foreign words.

Quotation Marks with Other Punctuation

While commas may go before dialogue, they don’t belong in front of words or phrases that are closely integrated into the rest of the sentence.

Though the British would disagree, Americans and most Canadians put periods and commas inside closing quotation marks. However, exclamation points, question marks, colons, semicolons, and dashes only go inside quotation marks if they’re part of the element—whether dialogue, title, or expression—being enclosed.

When Not to Use Quotation Marks