Clichés to Avoid: Orbs and Tears

“Tears rolled down her face” is a sentence I’ve come across more than a few times in the work of beginning writers. While it’s more descriptive than “She cried,” there’s a lot more to crying than tears, rolling or otherwise. 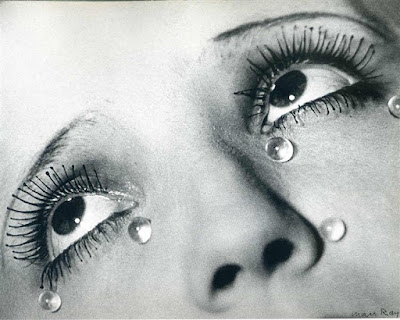 Of Orbs and Eyeballs


But before we get to tears, let’s talk about orbs. Orbs, which means “spheres,” is sometimes used instead of eyes, often accompanied by a colourful descriptor, as in “emerald orbs.” It’s true, eyeballs are spherical, but you’re not likely to notice unless they’ve been taken out of their sockets. Orbs makes me think of crystal balls and marbles; I’ve never looked into someone’s eyes and thought, “Ah, so spherical!” Unless you’re describing the eyeball manufacturer in Blade Runner, steer clear of orbs. It’s almost invariably a sign of bad writing.


In the same way that eyes is better than orbs, green is always an improvement over emerald or jade. (And for the love of all that is holy, stay away from cerulean—it’s a cliché of clichés.) Have you ever actually seen eyes that look like emeralds? Were they cold and hard? Multi-faceted? Most of the time, we don’t notice people’s eye colour beyond a vague impression of dark or light. Unless you’re gazing into someone’s eyes, you’re far more likely to notice things like expression and movement: smiling, squinting, bulging, darting, glinting, shifty, wide, and so on.


Before the tears start rolling, people usually go through a few opening stages. If you’re writing from the crying character’s point of view, they might first feel a pressure or prickling behind their eyes. Their throat might tighten or their nose start to run. Water will probably fill their eyes, obscuring their vision, before it spills over their lower eyelids and eyelashes, often following a blink. Another character watching them might notice their red eyes and nose (if their skin is pale enough for it to show) before the wetness on their cheeks.

There are as many ways to cry as there are people to do it. Is your character a stoic type? They may blink rapidly, clench their jaw, look away, or swipe a hand brusquely across their face and pretend they just had something in their eye. In Pride and Prejudice, Lizzy is careful to put her handkerchief over her face before giving way to unrestrained crying. On the other hand, a character might be beyond caring what others think, letting the tears and snot slide down their face and drip off their chin without trying to wipe them away. Or maybe creating a scene is what they’re all about, like a toddler howling during a tantrum, or a bereaved mother wailing at a funeral.

Indeed, the noise of crying is often more noticeable than the tears. Sobs can be loud or muffled by a pillow, hands, or someone’s shoulder. And crying doesn’t just happen in the face: shoulders slump in despair, limbs go limp. A person might collapse—onto the ground or a couch or a bed—or they might vent their feelings by punching or kicking something (or someone). People sniffle and blow their noses, unobtrusively or messily. And it might all wind down with hiccups or deep, shuddering breaths.


To say that tears roll down a character’s cheeks isn’t really saying much. This is a chance to tell your readers more about the character and their circumstances. How they cry can show us their personality, culture, location, depth of feeling, and personal history. That’s a lot to pack into a few tears.

Keep the blood, sweat, and writing advice rolling down my face by supporting this blog on Patreon.
Posted by Grammarlandia at 16:08